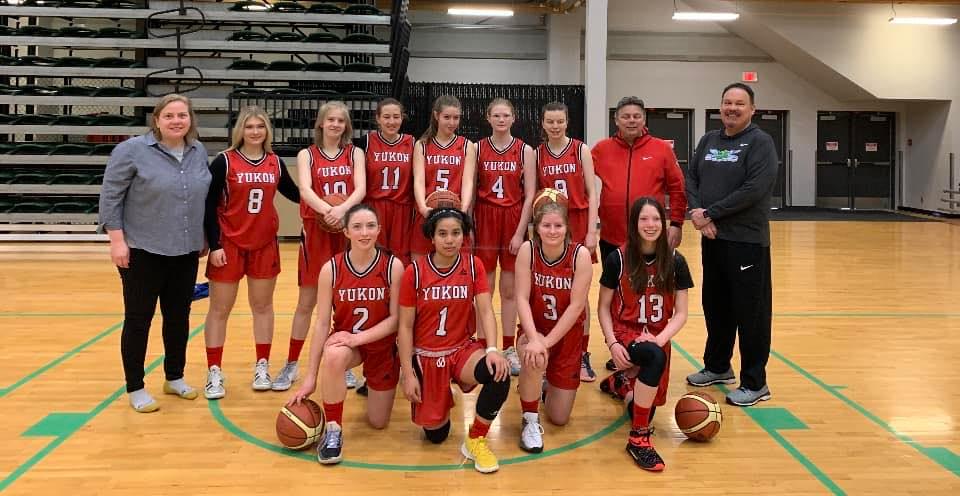 The girls’ Canada Summer Games basketball development team made the journey to Edmonton to vie in the Swoosh Maximum Madness Basketball Tournament.

Although the final roster for the Canada Summer Games, happening in Niagara in August, hasn’t been finalized, the tournament was used as development for all the girls, as well as a chance for the coaches to see the CSG hopefuls in game action.

Diedra Davidson, one of three coaches who travelled with the team, said the coaching staff wanted to encourage “sport for women and girls, especially in basketball in the territory.”

“Part of going to the tournament was to develop basketball in the territory,” said Davidson. “Then it was also to get a vision of what these girls can do, instead of basing team selection off a one-weekend trial.”

The CSG hopefuls have been practicing since Feb. 12 – after the initial Games trials were held. Davidson said the coaching staff has tried to replicate game-play situations in practice but it doesn’t compare to actual competition.

“Through competition, you can see who’s a competitor and who pushes hard,” said Davidson. “You don’t get that much through practice. You can try but it’s never the same."

The Yukon was hit with a COVID-19 outbreak in late November and it carried through to the new year. Because of that, the hoopers lost the school basketball season.

Although the team practiced a lot during that time, Davidson said the tournament has renewed the excitement of the squad.

“When you travel out, you don’t just compete as a team,” said Davidson. “You build stronger relationships through competing together and travelling. When we came back with these girls they were more excited to get back to work.”

That same energy of excitement, Davidson said, translated to the coaching staff as well, as they were able to identify new areas to improve and hone in on the team’s strengths.

Head coach Jason Peters said the girls started out with some nerves, but over the four games of the tournament were able to continue improving – culminating in a 16-point win in their final contest.

For Peters and the coaching staff, the development of the team goes beyond this tournament and the upcoming Canada Summer Games.

“We are trying to bring that winning culture, but it takes time,” said Peters. “We can start to see the light at the end of the tunnel. It’s not just about winning. It’s about learning how to win and learning how to learn to train.”

Peters said the team is setting benchmarks for the team at the Canada Summer Games and beyond.

“It takes time to medal at Canada Summer Games, but we’re sure as hell going to try and medal at the Arctics in January,” said Peters. “This team is going to be ready and we’ll be ready for the Canada Games.”

As Peters said, “it’s all about the long game.”

“Development is important to us,” said Peters.

The Canada Summer Games development team is now back in the Yukon for more training but will be heading to another tournament in May.

Team Yukon has a successful return to Games action

After a long hiatus from Games, Team Yukon got back into the action with plenty to celebrate.